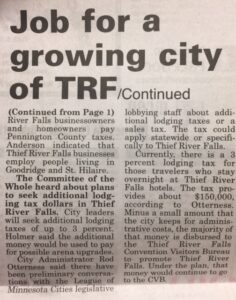 The city’s effort aims to change state law in two ways: 1. To allow the City of Thief River Falls to impose an extra 3% lodging tax (over and above the current 3% that is collected at all 7 hotels and the city campground and used by the CVB to market and promote Thief River Falls) and 2. To use the additional 3% lodging tax to pay for arena upgrades (that include potentially another sheet of practice ice attached to the Huck Olson Memorial Civic Center.) Thief River Falls is not a metropolitan city and visitors will not pay a 6% lodging tax in a community our size, in addition to the 6.875% sales tax. Furthermore, the usage of lodging tax has been protected by MN State Statute for 30+ years to NOT be spent on capital expenditures, but instead to market and promote an entire community equally.

Stengrim presented information about this effort at both the Thief River Falls Chamber of Commerce board meeting and the Jobs Incorporated board meeting, and both organizations voted to oppose this effort and send letters of opposition to the City of Thief River Falls. Both organizations agreed that this effort would have negative implications for all Thief River Falls businesses when assessing the decrease in competitiveness our community will face for not only attracting leisure travelers, but also business travelers. The argument has been used that only visitors pay the lodging tax so it shouldn’t have negative consequences for our local businesses, but that argument doesn’t account for our large businesses that pay for their vendors to stay at our local hotels (which accounts for a substantial percentage of the lodging tax.)

After speaking with most all of the City Council members, the CVB thought this was a dead issue because the majority of them do not support this effort. Although, the City Administrator just told the CVB that the additional lodging tax effort is still something that the city is “exploring,” but that they are also exploring imposing a food and beverage tax instead. The CVB will continue to educate key stakeholders on this implications of this effort, and look forward to discussing this further with the City Council in November when we present our 2018 budget.